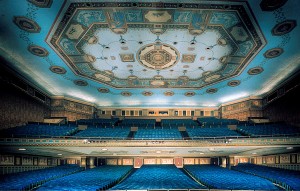 Inside the Pasadena Civic Auditorium

In addition to having world-class museums, neighborhoods and architecture, Pasadena also has world class live entertainment venues.  Here is a quick list of the top venues in Pasadena.

Beckman Auditorium – Sometimes referred to as the “wedding-cake building” on the Caltech campus, this auditorium offers a gateway to world-class scientists, artists, speakers as well as a a wide-variety of performing arts entertainment.  http://www.caltech.edu/content/public-events

Ice House Comedy Club – This professional comedy club showcases top-of-line comedians and has a restaurant and full-bar on site.  Be prepared to laugh, and laugh, and laugh.  http://icehousecomedy.com

A Noise Within – “One of the nation’s premier classical repertory company.” – The Huffington Post.  This new-to-Pasadena theater company always puts on a thought-provoking and imaginative show.  http://www.anoisewithin.org

Pasadena Civic Auditorium – Built in 1932, this historic 2,997-seat auditorium is one of the most revered performance halls in the nation.  Today, it is the proud home of the Distinguished Speaker Series and NAACP Image Awards, among many other live events.   http://pasadenacivic.visitpasadena.com

Rose Bowl Stadium – Of course, home to the Rose Bowl football games, this famous stadium is home to the UCLA Bruins, the Los Angeles soccer team Galaxy and houses many rock concerts and live events.  http://www.rosebowlstadium.com